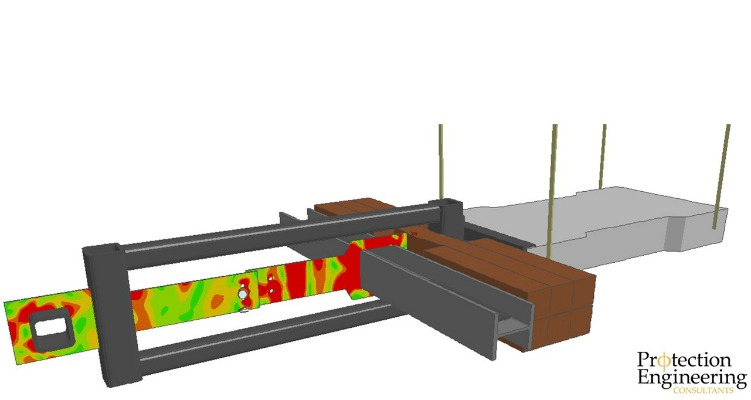 PEC developed numerical modeling procedures for bolted connections that are subjected to highly-transient dynamic loads, as part of an SBIR Phase II project for the US Marine Corps. Such loading conditions might result from blast, ballistic impact or vehicle collision. It is fairly easy to predict the static fracture load of a bolted connection, but it is much more challenging to predict the full load history of a connection during rupture, where the connection loses any ability to transfer loads. The full load history of a connection is important in highly-transient loading conditions because the total energy that is dissipated before and during connection rupture is crucial in modeling the response of the vehicle and its occupants. PEC collaborated with Southwest Research Institute (SwRI) to perform static and dynamic tests.

More than half a dozen different bolted connection configurations, consisting of two steel plates connected with one or more pre-tensioned bolts, were loaded in direct shear. The connection specimens were tested statically and dynamically using a 2,250-lbm pendulum. The test matrix included different bolts sizes, plate thicknesses, and bolt-hole-to-edge distances. As a result, in some specimens the bolts sheared, and in others the connected plates failed in block shear, as shown in Figure 1.

The modelling effort started with a simple plasticity model, which was able to predict the peak strength of the tested connections, but was unable to accurately simulate the connection response past the peak strength as shown in the dashed curve of Figure 2. A more nuanced material model that accounts for strain rate and triaxiality dependent failure was employed in LS-DYNA. The *MAT_JOHNSON_COOK model and the GISSMO damage model on *MAT_ADD_EROSION allow the definition of such failure criteria. The predicted load paths using those material models were in close agreement with the experimental results as shown in Figure 2.

Detailed LS-DYNA models were developed for each of the test specimen configurations. All components were finely meshed with solid elements and they interacted with each other through contact definitions. Pretension was applied to the bolts using the *INITIAL_STRESS_SECTION keyword of LS-DYNA. These detailed models were used as a high-accuracy baseline for later comparison with varying methods of model simplification.

Several degrees of model simplification were implemented, which involved the progressive replacement of various solid-element components with thick shells, shells, and beams. A simplified modeling approach employing a combination of shell and beam elements is depicted in Figure 3 and Figure 4.

Special attention was given to the correct representation of contact between the bolt-shank and the plate holes. Among a number of different options, it was found that beam-to-beam contact pairs resulted in better response. This was achieved by merging very thin null beam elements (*MAT_NULL) to the edges of the shell elements on the perimeter of the bolt-hole as depicted in Figure 5.

This approach was shown to work well in simulating the response of the bolted connections considered in this study. The simplified models retained the ability to explicitly represent both bolt shear failure and block shear of the connected plates. Despite their reduced detail, these models still had the capability to provide realistic and accurate results up to the point that a bolted connection fully ruptures. Figure 6 shows a comparison plot between physical tests and simplified models of the peak connection force versus pendulum impact velocity of the specimens that were dynamically tested. Overall, simulations of the simplified connection models are more efficient since the solution times are two to three times shorter compared to the high-fidelity connection models while maintaining accuracy of the predicted response within acceptable limits.

This was a challenging project that demonstrated the value of numerical modeling for analyzing the complex phenomena associated with shock-loaded bolted connections.  To learn more about PEC’s numerical modeling capabilities, contact Michalis Hadjioannou, Matt Barsotti, or David Stevens.