Since 2008, we have supported PPG Industries, LLC (PPG) in the development of Mil-Tough® Lightweight Protective Panels for commercial façade and military protective applications.

In 2008, we were first engaged by PPG to assist with the development of engineering guidance for a panel system composed of novel reactive cement and fiberglass sheets later named Mil-Tough® Light Weight Protective Panel Systems. These panels were developed by PPG for use in anti-terrorism/force protection (ATFP) applications. Over the next five years, we performed several static and dynamic test programs while working with PPG to improve the panels’ constructability, consistency and performance.

In 2009, we developed preliminary dynamic response resistance functions for use in single-degree-of-freedom (SDOF) analyses based on the material properties and lab test results provided by PPG. In support of the preliminary models, we performed seven full-scale shock tube tests at the ABS Consulting Inc. facility in Bulverde, Texas. The panels were subjected to the Department of Defense (DoD) and General Services Administration (GSA) level blast loadings based on the Unified Facilities Criteria (UFC) 4-010-01 and Interagency Security Committee (ISC) requirements. The panels performed well, and sustained loads well above the UFC and ISC minimums. Finally, calculations and cost estimates were performed to compare the performance and costs of the Mil-Tough® panels to conventional façade construction techniques, including brick over steel studs and architectural precast concrete. 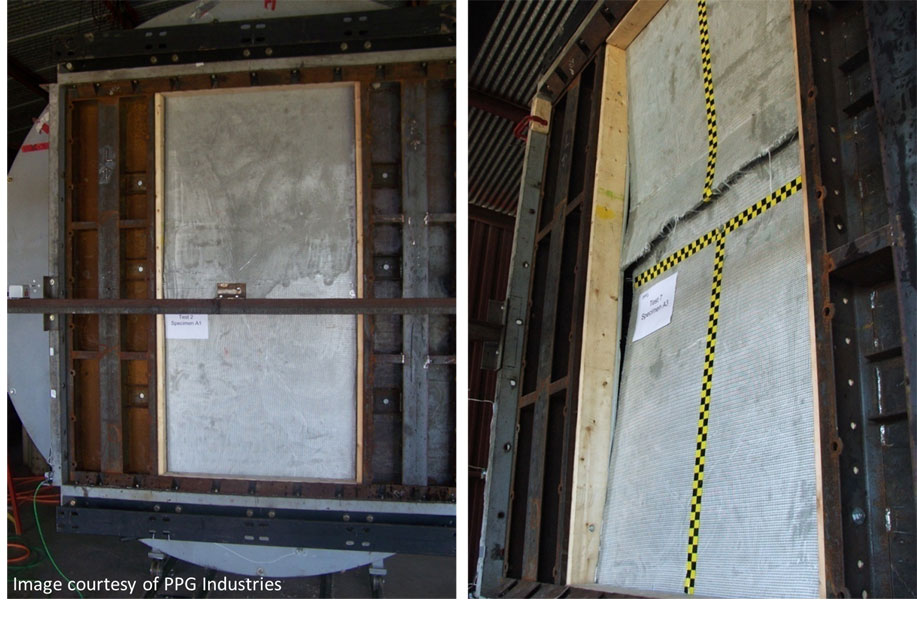 In 2010 additional investigation and testing was conducted to evaluate Mil-Tough® panels against personal borne and vehicle borne improvised explosive devices (PBIED and VBIED). In cooperation with the Air Force Research Laboratory at Tyndall Air Force Base (AFRL), we planned two full-scale tests against PBIED and VBIED threats. Two identical specimens were tested to evaluate their performance when subjected to the IED blast and fragmenting loads. The results of the large-scale tests suggested that the Mil-Tough® panels could successfully provide adequate protection from these combined blast and impact threats. At the same time as we were performing these tests we also developed the preliminary connection designs for panel-to-panel gravity and lateral connections for use in commerical systems.

In 2011 we performed a structural evaluation of a modular structure (steel frame enclosed with Mil-Tough® panels) subjected to blast and fragment loads. The goal of this analysis was to determine realistic tactical threats (DoD or GSA blast loads and typical fragment loads) that the modular structure could withstand while meeting the DoD low level of protection (LLOP) response criteria (per the UFC 4-010-01). Our analysis included analytical evaluation of the local member response, global frame response, and frame overturning. SDOF (SBEDS) analysis was performed for individual member response and SAP was used to evaluate overall frame response.

In 2012, our engineers developed a more robust material model and resistance function that includes flexure, shear and localized response (localized damage) for use in SDOF analysis by designers for specification of Mil-Tough® panels for blast and impact protective applications. Static laboratory testing was performed by PPG and AFRL to better understand panel performance. Full scale blast tests were performed by AFRL to provide data to validate the flexural model. One large-scale blast test on sixteen Mil-Tough® panels was performed to evaluate the performance of Mil-Tough® panels subjected to blast loads. Data from this test, in conjunction with static laboratory test data was used to calibrate and validate the Mil-Tough® panel model and to determine appropriate response limits for design. A unique aspect of this test was the evaluation of “pre-damaged” panels; both statically by AFRL and in the blast test. These test panels, pre-damaged by ballistic impacts with “worst-case” fragments, were intended to simulate panels in the field subjected to close-in mortar or rockets where both fragment impact and blast loads are present. The Mil-Tough® panels performed well under blast loads even in the “pre-damaged” state.

Our work with PPG demonstrates the unique partnering PEC can have with industry to advance product development and to provide engineering support in practical applications of products and systems.