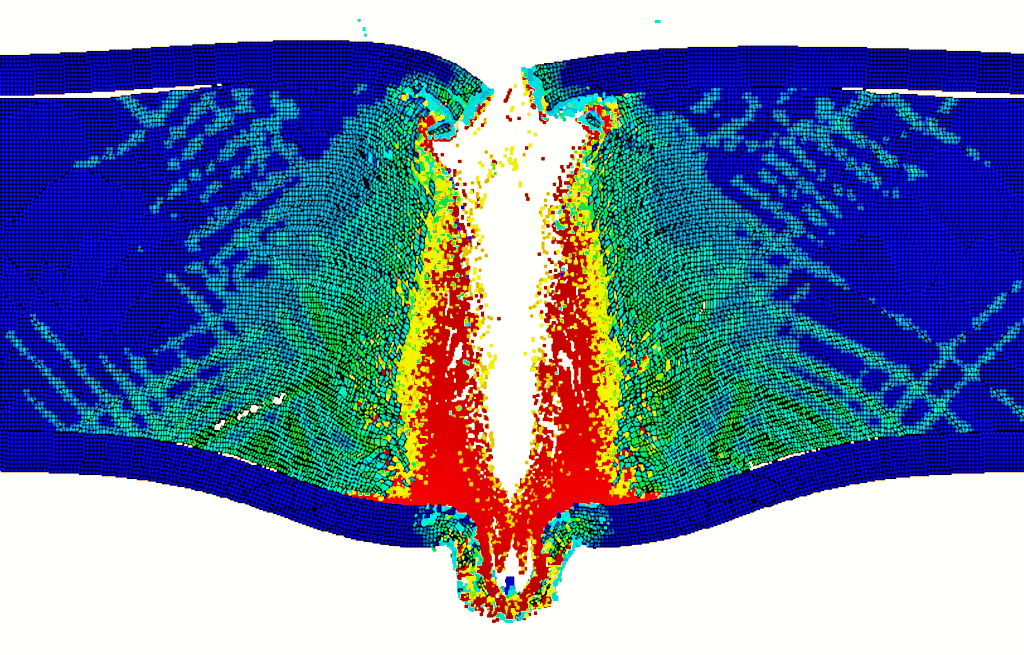 During a 2014 effort for the U.S. Army Engineer Research and Development Center (ERDC), we were tasked with modeling kinetic energy penetrator (KEP) damage to layered armor system concepts. Explosively driven penetrators present a number of challenges for accurate modeling and damage prediction. Historically, high strain-rate penetrator impacts have often been modeled with hydrocodes like CTH or by using fluid formulations in FEA codes, such as LS-DYNA ALE. Yet hydrocode frameworks carry limitations, since they require very fine meshes to capture thinner structural features and have difficulty representing layered system mechanics such as composite action, friction, and slippage. Lagrangian methods can capture those dynamics, but finite element approaches fall short where high strains and material dislocations are involved. The failure and erosion of finite elements leads to volume loss and over-predicted penetration effectiveness.

PEC often capitalizes upon the latest and most advanced features of codes such as LS-DYNA. In this case, we modeled the penetrator and protective system components with finite element bricks. Upon reaching a critical distortion, those bricks eroded into SPH particles that retained the stress and strain state of the distorted elements. This hybridized approach of FEM and SPH kept the entire model Lagrangian. Stabilizing this strategy required a degree of time investment, but the final approach proved robust, accurate and visually impressive. The structure included high fidelity representation of layer-to-layer interactions within the protective system, yet no material volume was lost in the high compression zone under the penetrator tip.

The hidden story behind such results was one of detailed attention to constitutive modeling for the materials involved. Our initial models used preexisting constitutive parameters for RHA steel (Rolled Homogeneous Armor), as found in various literature sources. When model predictions failed to match a validation test case, we suspected a material property shortfall. Eventually, we developed a fresh Johnson-Cook/Gruneisen model of RHA by starting from test data and taking a rigorous approach to representing triaxiality effects on material ductility. The new steel model dramatically improved accuracy while eliminating the need for ad-hoc erosion based on the so-called “spall” criterion. It incorporated (1) rate and thermal effects on plasticity, (2) rate, thermal and triaxiality effects on material damage and failure, and (3) an equation of state to represent the dilatational material properties before and after strength model failure.