We are happy to announce that our partnership with Runway Safe, a new US company that is commercializing the Engineered Material Arresting System (EMAS), has resulted in the successful completion of the world’s first Runway Safe EMAS on the 22L runway end at Chicago Midway International Airport.

Runway Safe EMAS is an FAA approved safety system that consists of a compacted silica foam covered with low strength concrete and an MMA encapsulant and coating that safely stops aircraft that overrun into limited length runway safety areas. The silica foam is a sustainable product that is produced from recycled glass. 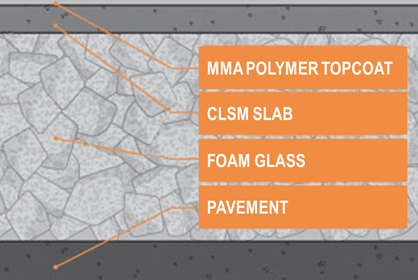 The Runway Safe system recently installed resulted from original research performed by Matt Barsotti at PEC for the ACRP (Airport Cooperative Research Program), which was funded by the FAA and the TRB (Transportation Research Board) in the US starting in 2007. That research was extended to system development and commercialization through cooperation with investors in Norway and most recently Sweden. Full scale testing was performed in 2011-2012 and FAA acceptance was granted in 2012. Additional installations are planned for remaining Chicago Midway runways as well as at other airports in the US and Europe.

Contact Matt Barsotti at PEC for more information on Runway Safe, EMAS systems and analysis of safety and protection systems for aircraft.