Aggie 100: Recognizing the Fastest Growing Aggie-Owned or Managed Companies in the World

Texas A&M University recently recognized Protection Engineering Consultants as a member of the 2016 Aggie 100, which honors the fastest-growing companies in the world, owned or operated by Texas A&M University Former Students. PEC was ranked 35th with a compound annual growth rate of 54.3% from 2013 through 2015. The Aggie 100, a program created by the Center for New Ventures and Entrepreneurship in Texas A&M University’s Mays Business School, honors graduates from across disciplines for their entrepreneurial endeavors and success as business leaders.

Kirk Marchand, Senior Principal and co-founder of PEC, attended the gala, held in the Hall of Champions at Kyle Field, to receive the award and provide his thoughts on leading PEC, a small high-tech consulting business, as the Managing Principal for our first 10 years. He used the acceptance opportunity to speak to the crowd of entrepreneurs and guests about the importance of initial funding and sustained but reasonable profits, hiring the best and brightest, making work fun and making an impactful difference through advancing the art of engineering.

“The 12th Annual Aggie 100 is a very impressive representation of Aggie excellence. The companies reflect 1,352 years of experience bringing the best to their respective industries and keeping the Aggie entrepreneurial standards alive and well,” said Richard H. Lester, executive director of the Mays Business School’s Center for New Ventures and Entrepreneurship. “We’re so proud of these top 100 performing Aggie entrepreneurs, and we celebrate the success of all Aggie companies that live by the Aggie Code of Honor: Aggies do not lie, cheat or steal or tolerate those who do. We need more of that in today’s business world.” 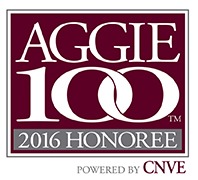 The Aggie 100 list in its entirety may be viewed at www.aggie100.com

PEC is attending the 2018 PCI Convention and National Bridge Conference